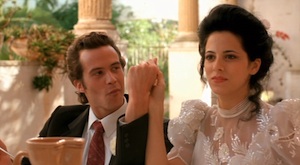 Solino is the name of a small Italian town and the place where the film begins and ends. From here, the Amato family – consisting of father Romano, mother Rosa and their sons Gigi and Giancarlo – set off in search of a new and economically more prosperous life in Germany. The film essentially depicts the experience of Italian guest workers who were ‘invited’ by the German government in the 1950s and sixties to contribute with their labour force to the economic miracle.

The Amato family ends up in the industrialised city of Duisburg, in the Ruhr region, at the time the centre of Germany’s coal mining and heavy industry. Duisburg is presented as a cold, dirty, and inhospitable place compared with the charm of sun-drenched Solino. The father loathes his work in the coalmines and the family opens the first pizzeria in Duisburg. The family business flourishes and, over the next ten years, Gigi and Giancarlo successfully adjust to their lives in the host country. Gigi is just about to launch his career as a filmmaker, when his mother falls fatally ill. Rosa leaves her unfaithful husband and returns to Solino.  Out of love and filial duty, Gigi follows her. Rosa miraculously recovers and Gigi, too, finds complete happiness. He marries his childhood sweetheart Ada, realises his ambitions as a filmmaker and re-opens the local open air cinema, turning it into a magical space, reminiscent of the cinema in Guiseppe Tornatore’s film (1989) Cinema Paradiso.