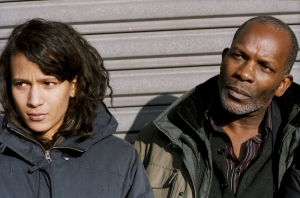 Paying homage to Yasujiro Ozu's Late Spring, a melodrama about a father and daughter whose close and loving relationship is sacrified for the sake of social conventions, 35 Shots of Rum centres on a similarly close father-daughter bond but lacks the melodramatic affect and concludes on a more optimistic note.

The film tells the story of Lionel, a widowed engine-driver working for RER, and his daughter Joséphine, a student in her early twenties. Lionel has brought up Jo alone in a Parisian suburb, but the film avoids the normal bleakness associated with the living conditions of diasporic families. In fact, Denis's film does not make much of the family's migratory and ethnic minority background: Lionel is black and from one of the départements d'outre-mer and territoires d'outre-mer or DOM-TOM, the French Overseas Departments and Territories, and a French citizen, and Jo is mixed racial origin with her deceased mother being German. However, unlike in most other films about diasporic families, Denis's film takes the protagonists' ethnicity for granted. There is nothing remarkable about it and it is certainly not presented as the film's central concern.

The film traces the uneventful daily lives of Lionel and Jo, revealing their deep affection for each other through small gestures. Yet their happy routine is threatened by Jo's looming adulthood - will she leave Lionel? Will Lionel succumb to alcohol, as the film's title might suggest, in his loneliness?

Link to the official site of 35 Shots of Rum