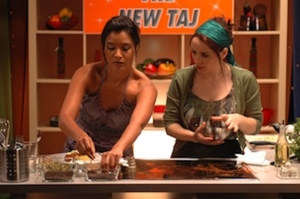 Described by Pratbha Parmar as a film about the family, food and love, this ethnic romantic comedy tells the story of Nina Shah, a young Scottish Asian woman, who falls in love with the white Scottish Lisa while preparing to enter into a televised cooking competition.

Nina, who ran away from her family three years ago after breaking off her engagement to Sanjay, returns from London to Glasgow to attend her father's funeral. She is determined to take over her father's restaurant, The New Taj, only to find out that he has gambled half of it away and that the restaurant is now co-owned by Lisa. She also learns that The New Taj has been shortlisted for The Best of the West Curry competition, alongside The Jewel of the Crown with Sanjay as its master chef. Nina, who was initiated into the art of cooking by her father as a little girl, is confident she will win simply by following her father's advice: ‘Taste it, taste it in your heart, … no matter what the recipe says, always follow your heart’. Spending time together with Lisa in the kitchen and exploring the sensuous delights of exotic food, Nina grows ever more attracted to Lisa until, one day, they fall into each other’s arms and passionately kiss. Nina is worried that the revelation of her secret desire will cause a scandal and might result in her being expelled from the family. This concern is, however, barely credible given that Nina’s mother appears quite open-minded about Nina's childhood friend Bobbi, a gay drag queen involved with a white Scottish man from his dance ensemble, the Chutney Queens. Then, Nina discovers that she is not the only one in the family with a secret. Her brother is secretly married to a Scottish woman; her little sister indulges in a secret passion for Scottish Highland Dancing and her mother has been secretly in love with Raj, the owner of The Jewel in the Crown, a love that appears to be mutual. Thus, rather ironically, only after Mr. Shah’s death does the entire family ‘come out’ with their secrets and everyone succeeds in realizing his legacy: they all manage to follow their heart, never minding the recipe, never minding the social rules and conventions. In fact, the late Mr. Shah makes a number of appearances as a ghost and even helps Nina and Lisa to win The Best of the West Curry competition. They celebrate their victory with a nationally televised kiss on Korma TV and there is no doubt that the ghost of Mr. Shah gives Nina and Lisa his blessing.