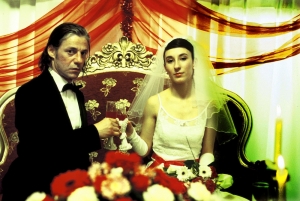 The film tells the story of Cahit, a self-destructive, alcoholic, cocaine-sniffing, 44 year-old Turk living in Hamburg and the 20 year-old, beautiful Turkish girl Sibel.

When they meet in a clinic, Sibel is recovering from a suicide attempt she committed in order to escape the oppression by her traditional Muslim-Turkish family. She is hedonistic and highly promiscuous. Since her family would not tolerate her behaviour she needs to get married in order to be free. Cahit is the ideal husband for such an alibi-marriage. But what begins as an alibi marriage, gradually turns into an amour fatal, a dark passion that creates a strong and destructive bond between Cahit and Sibel. Sibel’s promiscuity sparks Cahit’s jealousy and he unintentionally kills one of his wife’s lovers. Cahit is sentenced to prison. Sibel seeks refuge from her brother, who tries to avenge the shame she has brought upon the family, by fleeing to Istanbul. There she gradually descends into a dark and claustrophobic underworld of opium dens and self-destruction. Miraculously, she survives. Years elapse. After his release from prison, Cahit travels to Istanbul hoping to be reunited with Sibel. But the Sibel he tracks down is a reformed woman. She has traded her seductive allure and her pursuit of sexual adventures for an androgynous appearance and safe domesticity. Even though she spends a few nights of passion with Cahit, she ultimately decides against abandoning her boyfriend and child, leaving Cahit alone to embark on his journey to Mersin.